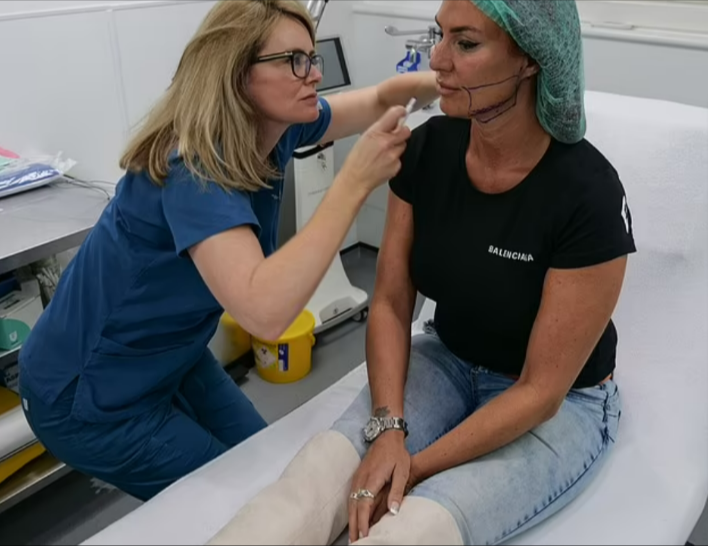 Real Housewives Of Cheshire star Lauren Simon has unveiled the results of her £3,500 non-surgical facelift after wanting to knock ten years off her age.

Reality TV star Lauren, 45, had the latest ‘no knife’ treatment to redefine her jawline, get rid of a double chin and generally improve her skin texture.

New before and after images of the procedure reveal Lauren’s smoother and tighter skin, which has removed her ‘double chin and jowls’.

Following the treatment, Lauren told MailOnline: ‘In the last couple of years I could see a big double chin on every picture taken of me and it was really starting to bother me. You could really see it, especially from the sides.

‘I also had jowls, my skin was looking dull, and I felt I was really ageing on my neck. It’s sagging slightly which is causing the double chin.

‘I just feel my neck needed lifting because I’m looking closer to 50 than 40 and also underneath my eyes, they looked bit tired, and needed to be refreshed.’

‘I just felt like I needed a little tweak, but I didn’t want a full face lift. I’ve had FaceTite which burns away the fat in your neck and gives you a tighter jawline, and I also had Ellevate underneath that is a thread under your jaw which basically lifts and tightens everything, which also emphasises your jawline.

‘After that I had Morpheus8 which rejuvenates the skin surface and gives you a more youthful look, a nice dewy fresh face look, so I no longer look tired.

‘I’m really happy with the result I think it’s taken years off me, and it’s rejuvenated my skin and I wake up in the morning and I haven’t got big bags under my eyes.’

She had her treatment at the Re-Enhance Clinic in Hale, Cheshire, with Dr Judy Todd – who has previously treated Judy Murray.

Lauren was given local anaesthesia for the treatments which lasted for a total of just over two hours.

A thin probe was inserted just below her ear and under the jawline to ‘burn-away’ fatty tissue and to promote skin remodelling using radio frequency energy. 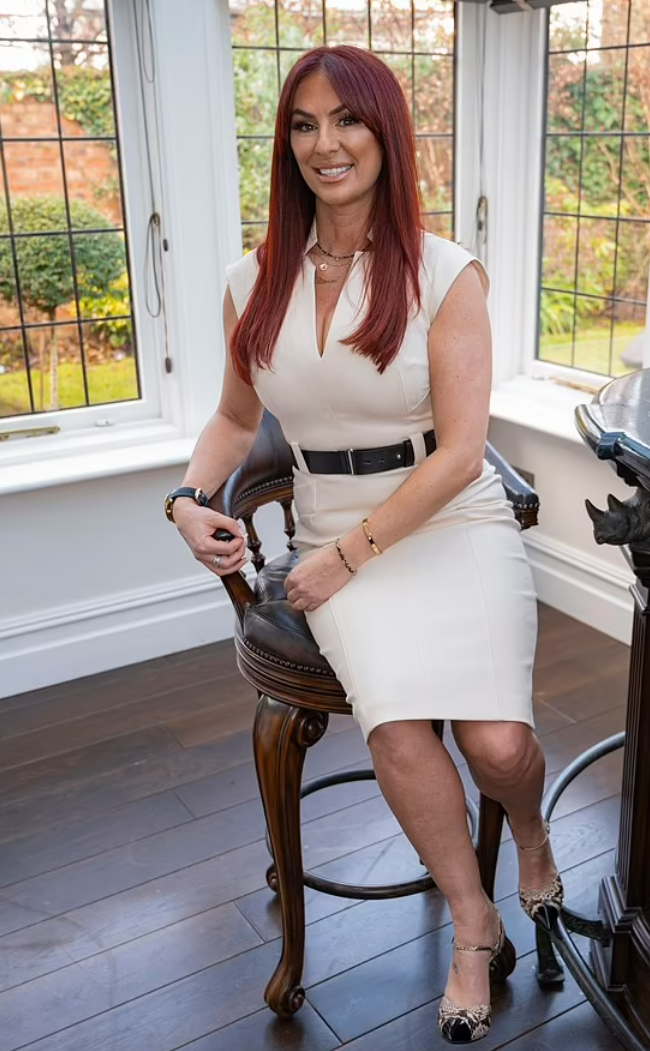 Dr Judy Todd said: ‘These before and after pictures were taken on the day of the treatment and then three months afterwards at a further consultation to check her progress.

‘Lauren is thrilled with the results of her treatment, her jawline is much more pronounced, her skin texture and pores are hugely improved, and the double chin has been almost entirely irradicated.

‘It has given Lauren so much more confidence to get back out again socially and it has truly given her a new lease of life, and she is so grateful for the everything we’ve done for her.’

Lauren first underwent a similar procedure in 2018 amid her divorce from her ex-husband Paul Simon.

The reality personality revealed she wanted to boost her confidence while getting back into the dating game.

Lauren, who shot to fame on the hit ITVBe show and has an estimated £6.9million fortune, split from her husband of 10 years, millionaire Paul.

At the time, she said: ‘I’m having fun and going out with lots of different people – but I’m never getting married again.’

During the divorce battle Lauren took time away from the show to focus on it.

Lauren told Closer: ‘I took a year off filming to try and finalise the divorce, but the plan was always to go back to the show.

‘I just needed to take some time off to sort myself out because it was a huge life change. The divorce battle is sadly still ongoing, but it felt like the right time to go back for me,’ she told OK! magazine.

Lauren was granted a £3 million payout as part of the divorce negotiations, however her ex-husband has been fighting it and has claimed it’s ‘discriminatory’.

What is FaceTite treatment?
FaceTite has been dubbed the ‘no-knife face lift’ because of its outstanding results without the need of a surgeon’s knife.

It works by using radio frequency energy to reduce fatty tissue, which in turn contracts and tightens the skin above.

The treatment takes around an hour from start to finish and there’s no convalescence afterwards, patients can go straight home after treatment, and the down-time is just 2-3 days.

The treatment is perfect for sagging jowls, turkey neck, lifting cheeks, redefining the jawline, recontouring the face and neck, improving fine lines and wrinkles, and can even treat eye bags.

It also costs around a third of the price of a Harley Street face lift.

Sorry, the comment form is closed at this time.

Excellent care & really pleased with the results, would highly recommend

Highly recommend this professional friendly Hale practice. A lovely friendly welcome from the staff . Had my first ever Botox treatment with Dr Martin Kinsella , I felt quite nervous and apprehensive but Dr Kinsella made me feel totally at ease and relaxed . Very pleased with my results subtle and natural. Will be returning very soon to have a variety of treatments . 👌

Highly recommend this professional friendly Hale practice. A lovely friendly welcome from the staff . Had my first ever Botox treatment with Dr Martin Kinsella , I felt quite nervous and apprehensive but Dr Kinsella made me feel totally at ease and relaxed . Very pleased with my results subtle and natural. Will be returning very soon to have a variety of treatments . 👌

I highly recommend Re-enhance , Highly qualify staff , who make you feel very welcome , and there treatments really do make a difference, definitely worth a visit .

wow, feel 10 years younger, can not recommend this place enough , felt totally at ease ,will defiantly be coming back ,thank you !

Thank you to Katie for transforming my skin, I was suffering with acne for many years and after seeing Katie my skin has never looked better! I had the hydra facial treatment and fusion micro-needling. Thank you again.

Went into Dr Kinsella's clinic today, I had an amazing hydra facial treatment with Tracey the therapist. I’ve also had filler with Dr Kinsella a month ago around jawline, cannot believe the difference. Thank you so much Re enhance for all your care and attention to detail!

Thanks to Martin & his team, whom I have used for a number of years and found them to provide sound advice, backed up with a fantastic service & amazing results

Thanks to Martin and his team, I have used Re-enhance for a number of years & found them to offer a fantastic service with a wonderful caring approach

Thank you to the team at Re-enhance Wakefield, I was a very nervous client before my treatments, the staff put me at ease, the treatment I received was excellent. I would highly recommend them and I will defiantly be coming for further treatment.

I have been coming to re-enhance for a few years now. I have regular hydra facials and lip filler every 6 months. Dr Kinsella and the therapists are the best in Cheshire. Thank you re-enhance!

I have been coming to re-enhance for the last few years. All the staff are so welcoming. I have regular hydra facial treatments and lip filler every 6 months. Dr Kinsella and the therapists are the best in Cheshire. Thank you!

This site uses cookies. By continuing to browse, you agree to their use.

This website uses cookies so that we can provide you with the best user experience possible. Cookie information is stored in your browser and performs functions such as recognising you when you return to our website and helping our team to understand which sections of the website you find most interesting and useful.

Strictly Necessary Cookie should be enabled at all times so that we can save your preferences for cookie settings.